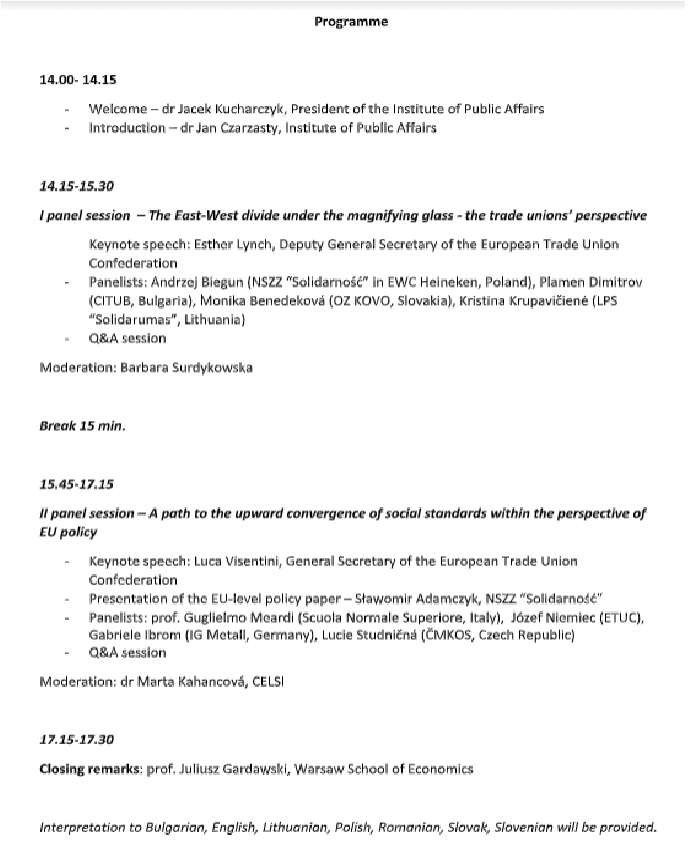 How do CEE trade unions articulate their interests? What difficulties do they notice in the process of convergence of social standards and what challenges do they see there? What prevents these organisations from being more visible at the EU level? And, finally, is it possible, and if so – how, to strengthen the mechanisms of cross-border union solidarity? These are the questions to which answers will be sought by the participants of the seminar “The (in)visible East-West divide – trade unions' voice on the Europeanisation of social standards.” The invited guests include Luca Visentini, the General Secretary of the European Trade Union Confederation and Esther Lynch, the Deputy General Secretary of the European Trade Union Confederation, as well as trade union representatives from Central and Eastern Europe and members of the academia.

The seminar will be the culmination of a two-year international research project, "ARTUS-CEE "Articulation of the Trade Unions' Strategies on upward convergence of social standards in the enlarged European Union - voice of CEE countries” (VS/2019/0070) implemented by the Institute of Public Affairs (the Project Leader) together with partners: Central European Labour Studies Institute (a co-organizer of the seminar), University of Ljubljana, Lithuanian Centre for Social Sciences, Institute for Public Policy, Centre for Economic Development.