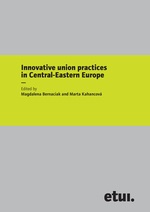 CELSI's researchers Bernaciak and Kahancová just published their new book, "Innovative union practices in Central-Eastern Europe", featuring a chapter "Reinventing the role of the Czech trade unions: halfway through the journey" by Martišková and Sedláková and chapter "From bargaining to advocacy: a trade-off between improved working conditions and trade union fragmentation in Slovakia" by Kahancová.

This book provides a detailed account of the innovative practices pursued by trade unions in Central and Eastern Europe since 2008. The book covers eleven post-socialist states that joined the EU in 2004, 2007 and 2013: Bulgaria, Croatia, Czechia, Estonia, Hungary, Latvia, Lithuania, Poland, Romania, Slovakia and Slovenia.

It looks at these innovations and the drivers behind them, paying attention to the characteristics of the national/sectoral industrial relations institutions, the resources remaining at unions’ disposal and the role of union agency.

The book also assesses the sustainability and impact of innovative union initiatives on unions’ established roles and on their countries’ industrial relations systems.

The book is available here: https://www.etui.org/Publications2/Books/Innovative-union-practices-in-Central-Eastern-Europe